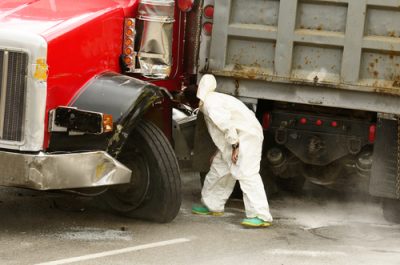 PAULSBORO, New Jersey — A semi-truck hauling liquid asphalt leaked the sticky substance across 14 miles of a New Jersey roadway on Tuesday. More than 20 cars were damaged as the truck driver carried on to his destination, unaware. The incident took place at approximately 5:00 a.m. on February 20th near Paulsboro, New Jersey. The company that owns the semi-truck, Tri-State Transportation, involved in the incident, told that the big rig left the Paulsboro Refinery with its load of liquid asphalt. He was traveling on Swedesboro Road when, unbeknownst to the trucker, rainwater leaked into the tanker, causing the liquid asphalt to boil and begin leaking out. The unknowing driver, who could not see the leakage in the dark of early morning, then continued on to Route 130 South, and then Interstate 295 South, leaking the substance for 14 miles before it eventually stopped on its own. The driver then made it to his destination in Baltimore, Maryland before even realizing what had happened. According to local news, during that time, the New Jersey State Police received multiple calls from motorists forced to drive through the tar, and that between 20 and 30 cars have been damaged. No one was injured in the sticky situation, but Tri-State Transportation says that anyone whose vehicle was damaged in the incident should contact them here. It is not yet clear what charges, if any, have been issued against the unidentified truck driver. As of 12:10 p.m. the tar, which was most concentrated along I-295 between mile markers 13 and 8, had been cleared from the roadway.

Citations All Around! Operation Safe Driver Week Generates Above 7,500