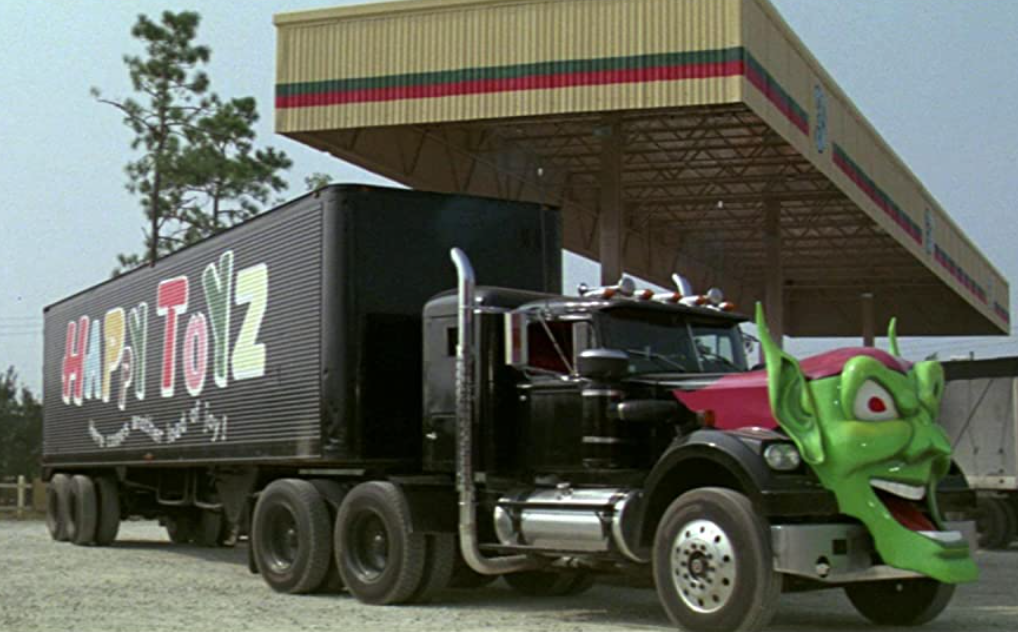 Stephen King is arguably the mastermind behind some of contemporary horror’s most chilling tales. It, Carrie and Cujo come to mind for me. But maybe a tale not many folks think about very often is that of a rampaging semi-truck. Enter Maximum Overdrive, starring Emilio Estevez, Pat Hingle, Laura Harrington and Yeardley Smith (of The Simpsons fame.) All you really need to know is that it’s about a terrifying group of commercial vehicles that try to force human beings into filling up their tanks to the fullest capacity of gasoline.

Apparently, it’s the only film that Stephen King has ever directed of his own works. When asked why he hasn’t directed a movie since, King says “Just watch Maximum Overdrive.” Which, by the way, he was adjusting to cocaine during the whole production of the film. This majorly impacted his ability, as he never was sure what he was doing directing.

The main villain, being the Green Goblin truck, was no more a year after the film would debut in 1987. Decades later, a man named Tim Shockey purchased it with the intent of maintaining the legacy of the Green Goblin face. After so long, he finally finished restoring it to its former glory in 2013, taking it everywhere in North America to horror and comic cons. The set, called the “Dixie Boy” truck stop, was so convincing that the producers implemented announcements that the “Dixie Boy” was a film set, not a real truck stop.

The director of photography, Armando Nannuzzi had sued Stephen King, because a lawnmower on set had been improperly controlled and permanently eradicated Nannuzzi’s right eye. Stephen King, for other reasons, believes that this was essentially the worst adaptation of any of his books ever.

Legendary rock band, AC/DC would score the music for the film, thanks to Stephen King himself. AC/DC signed on to do the music for the film because Stephen King was such a fan. Because he sang the whole of their 1976 classic “Ain’t No Fun (Waiting Round To Be A Millionaire!)” Pressings of the soundtrack with the movie’s logo are super rare. Finally, The Happy Toyz truck is supposedly a 1981 Western Star 4800.

Ford F-MAX Delivers The Efficiency You Deserve As A Trucker