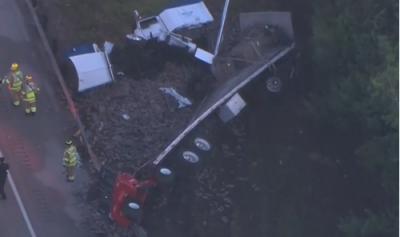 JUPITER, Florida — The cab of a semi-truck was ripped from its trailer in a three-vehicle wreck that shut down the Florida Turnpike early on Monday morning.

The accident happened at around 6:00 a.m. on April 16th in Jupiter, Florida.

According to local news, the wreck involved two tractor-trailers and a passenger car and sent one of the semi-trucks onto the grassy shoulder of the highway, where it overturned, ripping the cab from the trailer and leaking diesel along the shoulder. The front end of the car involved in the accident was also seriously damaged.

No one was injured in the incident.

One lane of the Florida Turnpike was shut down at the Indiantown Road exit for around two hours. As of 8:15 a.m., the roadway was completely reopened.

The exact cause of the crash is still under investigation.

Diesel Is Down In The Dumps This Year, No Thanks To Biden