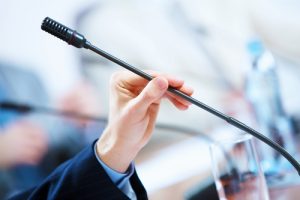 Ray Martinez, the head of FMCSA (Federal Motor Carrier Safety Administration), need to hear your voice.   He said he wants to hear what truckers have to say about the HOS Proposal. That is the reason he visited the Great American Trucking Show in Dallas last week. Martinez’s last effort was to talk with truckers. He had a non-official meeting with reporters Friday and chaired 2 listening events at GATS.   After his agency reports it was seeking comments on several issues that have raised, Martinez appeared at GATS. Those issues are: • Expanding the current 14-hour on-duty limitation. It will be up 2 hours when a trucker encounters adverse driving conditions • Extending the 100 air-mile “short-haul” exemption that is currently limited. It will be expanded from 12 hours on-duty to 14-hour, to consistent with the rules for long-haul truckers • Bringing back the option for splitting up the required 10-hour off-duty rest break for truckers operating trucks that are equipped with a sleeper-berth compartment • Revising the mandatory break of 30-minute for truckers after an 8-hour of continuous driving   Martinez understands that not everyone is going to like or agree with all 4 changes. However, he is willing to hear the reason for that.   “You don’t have to like all of them,” Martinez said. “You can like one and two but not three and four, that type of thing. And if you do like them, tell us why you think they’re a good idea that would, number one, not have a negative effect on safety but possibly have a positive effect.”   He told that that was kind of things that truckers are talking about but in order to move forward, they have to be able articulate that and we have to look at data that is being backed up. Martinez wants to make sure every word of a trucker is being heard of.   You can leave your comments here.

Hotshot Trucking Still Is A Big Hit Among Owner-Operators