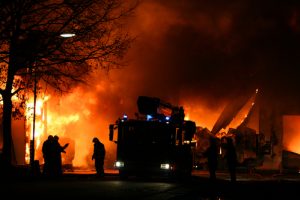 BOLTON, Vermont — The cause of fiery rollover in Bolton on Interstate 89 during Monday morning’s rush hour remains under investigation, police say.   The truck’s driver, Austin W. Wheatley of Brookfield, was pulled to safety by three other motorists before the vehicle burst into flames, according to a Vermont State Police news release.       The victim was taken to University of Vermont Medical Center for treatment of smoke inhalation, and chest and facial injuries, it adds.   According to Garrett Chapman, the driver had been wearing a seat belt, an eyewitness who later posted his observations on Facebook.   Chapman said he and others arrived at the scene shortly after the crash at 6:43 a.m. and tried unsuccessfully to fight the flames with fire extinguishers.   The truck exploded seconds after Wheatley was pulled from the cab, Chapman added.   Southbound traffic on the I-89 was halted for about 45 minutes after the crash, and did not fully resume until about 9 a.m., police said.   Troopers were helped on scene by Richmond police and rescue squads, members of the Bolton Fire Department and inspectors from Vermont Department of Motor Vehicles.   Anyone with additional information about the 2013 GMC truck prior to the rollover is asked to contact Cpl Andrew Leise at (802) 878-7111.

Cargo Theft On the Decline